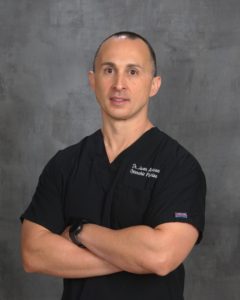 Dr. Jason Aronson became an Optometrist accidentally. While studying for his degree in Biology at Tulane University, he started to notice his vision in the classroom and across the campus was getting blurry. At that point, he met with an optometrist who described his profession in a way that Dr. Aronson knew this was for him. The next day, Dr. Aronson cancelled all his Medical School admission tests and had his advisor enroll him in the Optometry School testing program.

After graduating Tulane University in 1997, Dr. Aronson enrolled at the Nova Southeastern College of Optometry where he studied alongside multiple disciplines of medicine understanding how the eyes and the rest of the body all interact. After graduating Nova with a Doctorate in Optometry in 2001, Dr. Aronson continued his education and training at the Pennsylvania College of Optometry completing a residency in Primary Care Optometry in 2002. That year in Philadelphia was one of Dr. Aronson greatest years as he learned and taught alongside some of the leaders in optometry and ophthalmology – and he met his wonderful wife there too!

Dr. Aronson has practiced in South Florida for over 15 years in all forms of eye care, currently serving Greenacres. When not helping patients, Dr. Aronson enjoys playing and watching nearly all sports (especially his NY Giants), working out at the gym and, most of all, spending time with his wife and son!